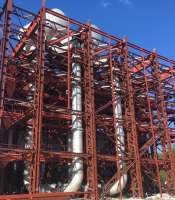 
two of the four U-Loop reactors visible during the Protelux construction process. Notice the size of the worker in the bottom of the picture.In Russia, Protelux completed the construction of its 6000 ton per year methane-to-proteins plant, based on Unibio technology. The parties are currently testing the plant and expect to commission it by late 2018.

It's a solid step for Unibio, a giant leap for single cell protein technology globally - and not the least in Russia. The demand for the product has never been in question, nor the abundance of methane feedstock. The question has been the absence of a reliable, advanced technology to get the job done.

We reported the big backstory here, in "Did little algae freedom fighters win the Cold War?" looking at Soviet efforts to develop and deploy such a technology going back to the 1970s.

The project essentials to know
• The plant has a production capacity of approx 6,000 TPA It is the first out of many plants to be constructed in the near future as the parties expect a rapid capacity increase to 100,000+ TPA

• Unibio runs its research and pilot facilities at the Technical University of Denmark (DTU) and its demonstration-scale plant in Kalundborg, Denmark

• The technology has been developed in close cooperation with DTU

• The production plant in Kalundborg is co-financed by Innovation Fund Denmark, which sees great potential in industrial protein production

• Uniprotein holds 70% protein content and is produced without the use of pesticides, utilizes significantly less water than plant-based protein sources and does not take up farm land

• The production process always results in a uniform product, and the only waste product is water and CO2.

In May 2016 Unibio signed a license agreement with with the intent to upscale and commercialize the Unibio U-loop technology in Russia allowing the conversion of methane into protein. Russia was chosen as an ideal site for such product as bacterial protein is historically known in the Russian market, as Russia has a well-developed compound feed industry, and there is access to an abundance of cheap natural gas. Now, a little more than two years after dry ink on the contract, the first plant is ready for testing and commissioning.

We reported in November 2016 that Unibio opened its Denmark-based fermentation plant to convert natural gas into a highly concentrated, single-cell protein and produce up to 80 tonnes per year. The protein-rich biomass is naturally developed without genetic manipulation; can be used as a direct supplement in animal feed; and has already been tested as feed for salmon, calves, pigs and chickens with positive results in terms of acceptance and growth rates.

All plant output was sold to Vestjyllands Andel, a Danish animal feed manufacturer, as part of an offtake agreement signed earlier in the year.

"This technology upgrade makes producing UniProtein much more efficient in terms of productivity and energy usage but also helps us maintain a significant lead over legacy technologies," Unibio CEO Henrik Busch-Larsen said at the time.

According to Unibio, the protein is a sustainable alternative to animal feed and is comparable to LT fishmeal. Adding it to the animal's diet reduces the amount of feed necessary and minimizing nitrogen excretion. The protein has been tested for salmon, calves, pigs, and chickens and is approved by the European Union.

Reaction from the stakeholders
Unibio CEO Henrik Busch-Larsen states: "It has been an exciting process working on this project, and it had been a very steep learning curve. I've been the CEO of Unibio for 6 years so naturally getting to the point where you see the fruit of the Unibio and Protelux teams' labour in the shape of four huge U-shaped bio-reactors is quite satisfactory. Hard work is still in front of us in terms of getting the plant commissioned but this is a very important milestone in the Unibio go-to-market strategy."

Next step 100,000+ tonnes per annum
According to Unibio, "this is just the beginning as the licensee has already reserved land for the future expansion. The land is situated in an industrial zone holding various international companies and where a lot of the necessary infrastructure is already present to support the project."

"We see this not just as a perspective investment into cutting-edge technology but as part of a bigger picture: a highly profitable industry of the local agricultural sector built from the ground up. The low cost of natural gas and electricity creates competitive advantages for Russia, when it comes to the production of bio protein*, we can expect this project's EBITDA to be in the tens of percent. Our strategic goal is to secure its own source of locally sourced protein concentrate which is currently in very limited supply, for the Russian market," said Protelux' oversight board chairman Mikhail Serdtsev.